TEARS OF THE CRYOSPHERE

TEARS OF THE CRYOSPHERE

Cryosphere, from Greek kryos, "cold", "frost" or "ice" and sphaira, "globe, ball", includes the parts of the earth where water is in solid form, for example snow, ice, glaciers and permafrost.

One of the exhibition's central themes is loss. A loss of nature that many of us hardly knew existed, and which disappears before we get to know it.

When I painted the mural "From Here to the South Peak" in Linköping two years ago, Kebnekaise's south peak was lower than the north peak for the second year in a row. Since the turn of the millennium, the southern peak's glacier has decreased in thickness by approximately one meter annually. The mural depicts cornflowers, Östergötland's landscape flower whose roots are shaped into a migratory bird. With the mural I wanted to ask, what happens to us when what we thought was rock solid moves or disappears?

It rains in places during the winters where it didn't before. It may sound like something insignificant, but it changes the habitat and conditions of plants, animals and people. The cryosphere turns into droplets that flood rivers and streams, reduce the salinity of the Baltic Sea, erode the coasts and sink southern Sweden's sandy beaches into the sea.

In the Baltic Sea there is an area that is over 66,000 km2 large where nothing can live. It is the world's largest benthic dead area. The only thing that grows there is a blue desert. It led me to paint the Baltic porpoise as a symbol of the state of the Baltic Sea. The porpoise is the only whale species that lives in Swedish waters all year round. It is one of the smallest whales and is critically endangered.

Lophelia pertusa, is the only reef-forming coral in Swedish waters, and in the Kosterfjord there were seven coral reefs. They were trawled to pieces and today only one small part of a reefs remain. On land in the same regions, the last specimens of Oyster plant are fighting increasingly warmer winters.

Last spring I painted a Swedish queen on a mural in London. It used to be a native hop species in England, but it disappeared. After ten years of trying to replant the Short-haired bumblebee queens brought from Scania to England, the research leader noted that: “The story of the Short-haired bumblebee reintroduction programme demonstrates how hard it is to bring back something once extinct. The best thing to do is to stop species from becoming extinct in the first place.”

Where is the meaning of the invisible? The loss of biodiversity, the cryosphere and a stable climate are our true costs. Before we realize the loss and its consequences, it has long been a fact for even more other species.

We can choose to see or not see, but to realize is to be affected emotionally. The cryosphere's tears change the living conditions and everything we in the Arctic are. But we can all actively be the drops that each create rings on the melting water and a new stream. 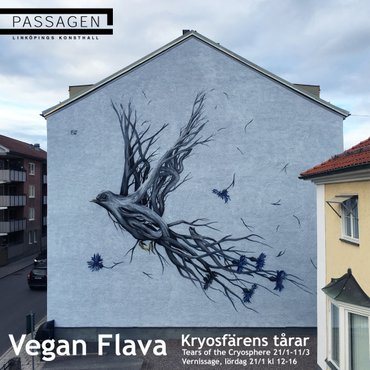 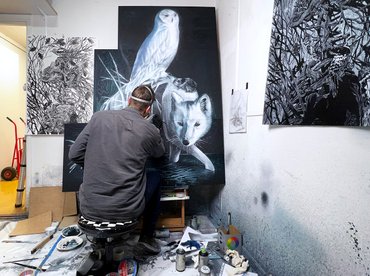 Länk till artikel i Corren

Länk till recension i Corren 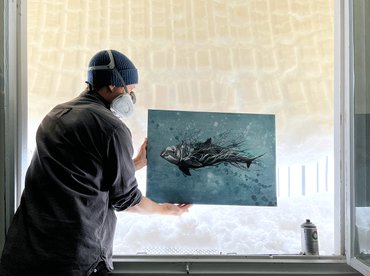